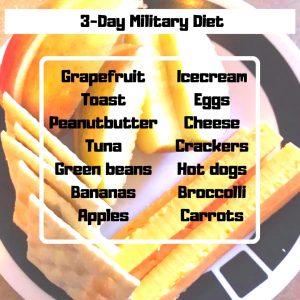 I wanted this to be true so badly!

Yes, I realize that as long as I lost any weight, technically that sentence would be true because it said ‘up to’. . .  And I did lose 3 lbs.

My ‘version; (or what I ended up eating) of The Military Diet:

Breakfast: ½ cup of Grapefruit, 1 slice of (Gluten-Free) bread, 2 Tablespoons of peanut butter. 2 cups of water with 1 tablespoon of Apple-Cider Vinegar. (it calls for coffee or tea, but I’m not a fan of caffeine)

I was warned that it would be a ‘calorie deficit’ diet. And looking at the menu, it was plain to see that it really wasn’t a lot of food. But I wasn’t too worried about the hunger thing. I had trained my body to be ok not eating a lot. . . hahaha. Boy was I wrong. I was soo hungry at night! And I’m pretty sure that all 3 nights I went to bed with a mild ‘hunger headache’. The kind that if you concentrate enough, you could swear that the pain was coming up from the hole in your stomach right up to your brain!

But I survived just fine. It was only 3 days. Anyone can do anything for 3 days.

And I was only hungry if I stayed up too late at night. and, of course, i woke up starving, which was easily fixed by eating breakfast. So really, completely doable.

The hardest part was eating a full cup of tuna. That was rough. But I did it, and I got ice-cream afterwards. So Yay Me!

The next couple of days afterwards, I was conscientious of my eating. I made sure I stayed away from baked goods, and had plenty of fruits and veggies to fill me up. I managed to keep the 3 lbs off, so hopefully that means that the ‘weightloss’ is ‘locked in’.

My daughter was looking at the menu (probably the ice-cream) as I was preparing for the 3 days, and she liked everything in it and asked if she could do it too.

She’s almost 11. I know that maybe some would disagree about ‘putting’ a child on a diet’. But I wasn’t too worried. It was only 3 days.

I bought plenty extra fruits and veggies, so if she was hungry, there would be more for her to eat. I promise I was not going to make her starve. And hopefully she could learn a bit about choices and deferred gratification in the process.

Surprisingly, she didn’t ask for much, or even wanted the extra fruits and veggies I offered her. She did add some bread with the tuna on the last night. She dipped down a couple of pounds, and in the end enjoyed it all. Especially while eating the ice-cream and telling her younger brother that he couldn’t eat any of it.

I would give this diet a one thumb up. It did work, just not as much as it claimed it could, and although I was hungry, it was only 3 days, so its possible to do. The other thing that I liked was that I felt that the price for the food was really reasonable. I wasn’t buying high-priced diet food.

So yeah, not bad at all. 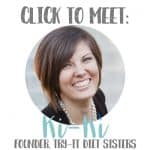 We are on a mission to find the best (or worst) diets out there, and we’ll let you know our results.

Looking for an easier way to meal plan? We've got you covered! Yummy, easy recipes, truly customized to you! Use code GET10 to get $10 off at PlateJoy!

And, as always, the opinions expressed are our own. We are not medical professionals and do not claim to be. Please consult your doctor before trying any new exercise or diet program. Please see our medical disclaimer for more details.***

We use cookies to ensure that we give you the best experience on our website. If you continue to use this site we will assume that you are happy with it.Got ItPrivacy policy